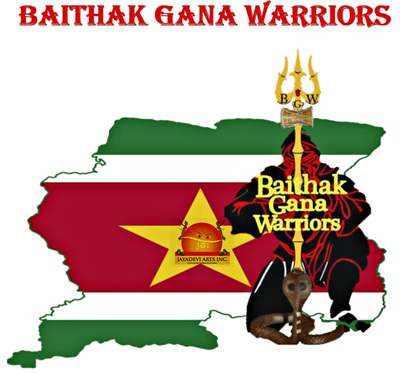 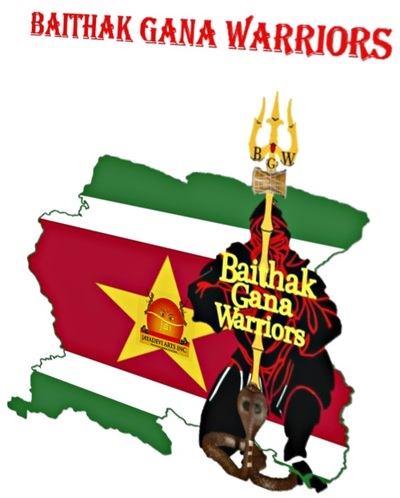 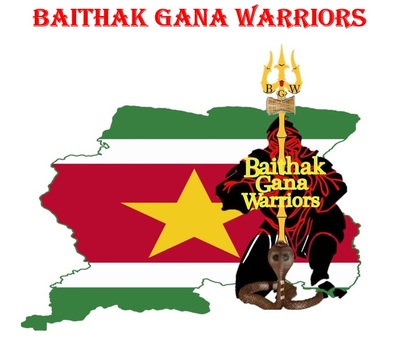 BAITHAK GANA WARRIORS  (BGW) a very talented musical group from Suriname, South America founded in 2014. Warriors defined as defenders or protectors of the traditional art forms of Suriname which are Baithak Gana music and Londa Ki Naach style of Dance. These are traditional dying art forms in need of protection, preservation, and promotion. This is accomplished by a very passionate army…. The Commander and Chief of this distinguished army is the versatile internationally acclaimed Recording Artiste Rayen Kalpoe founder, singer, composer, musician, cultural activist, and a member of Jayadevi Arts Inc.  Legal Papers are in the works to have Jayadevi Arts Inc in Suriname with Rayen Kalpoe as the Executive Director.

BGW is under the umbrella of Jayadevi Arts Inc (JAI) in Florida USA.  JAI is BGW's Record Label, Registered Agent, Manager, and Producer.

All rights reserved. No part of this publication may be reproduced, distributed, or sold in any form or by any means, including , recording, or other electronic methods, without the prior written permission of the publisher, except in the case of brief quotations embodied in critical reviews and certain other noncommercial uses permitted by copyright law.  ALL Rights reserved by Jayadevi Arts Inc FL USA
Jayadevi Arts Inc Copyright © 2015 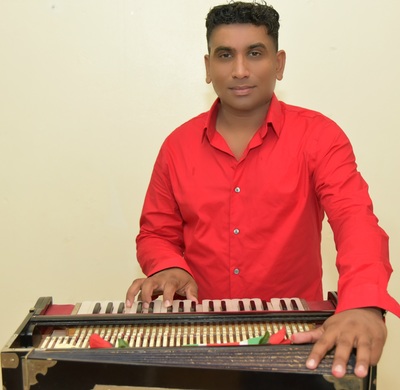 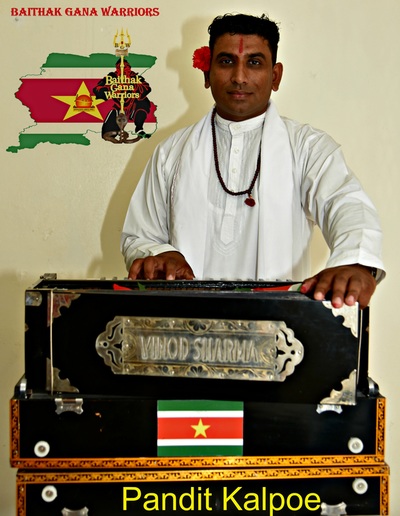 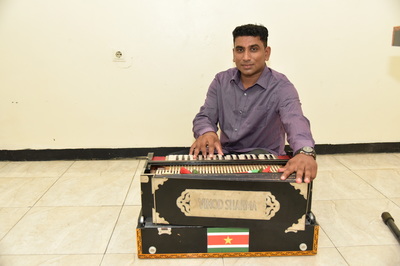 THE COMMANDER AND CHIEF OF THE BAITHAK GANA WARRIORS
Rayen Kalpoe is an internationally acclaimed recording artist and leader of the versatile and popular musical group Baithak Gana Warriors. Rayen is a distinguished artist in Baithak Gana and Chutney music. His career started as a teenager singing Bhajans (Indian spirituals). He also took music lessons at the I.C.C. (Indian Culture Center). One of the greatest moments in his career was winning the Bhaithak Gana talent show in 2006 in Suriname. He also performed together with popular local artists and different groups. As a versatile singer, composer, and dhantal player, Rayen can display many different styles in Taan and old Bollywood song in his Baithak Gana format. Rayen was invited twice to perform in Trinidad and Tobago. In 2008 he performed at the Rajkumari Cultural Center Kitchrie Festival in New York with renowned dancers Ramona Devi Singh and Mohini Tajeshwar, and in 2009 he was also part of a cultural event in Jamaica. In 2010 he traveled together with different Surinamese artist to participate in different cultural events throughout Suriname. 2014 in South Florida’s 1st Kitchrie festival presented by Jayadevi Arts Inc & Rajkumari Cultural Center was a success! Mr Kalpoe displayed Suriname Baithak Gana music live to the craving audience and had the pleasure of having Jayadevi Dancers perform his "Mor Tor"and "Lal Moneya" songs choreographed by Denyse Baboolal. He launched his first CD in 2014 titled "Mor Tor Maticoor". His songs were launched on Igroove radio in Nigeria, on Indian Talent Sangeet WAVS 1170AM Florida and WGFS 1430AM Atlanta, Georgia and was featured in newspaper articles both in Florida and Suriname. In 2015,  In NY, they performed 2 cultural Shows and 1 in New Jersey.  His Title Song "Siya Raam" is already a hit worldwide. Kalpoe is the first Indo-Surinamese to have his songs available online to purchase on 25 sitessuch as cdbaby, iTunes, Amazon, Shazam, Google play, etc and copyrights coded on each song.  His elections song is created waves on social media. Rayen has been a music director for many events in Suriname, New York, and Florida. His 2nd CD album with 10 songs entitled "Malik Jaane".   In 2016 the Baithak Gana Warriors were on a 21 days 13 event tour in Miami, Fort Lauderdale, Orlando, New York and New Jersey. Rayen and his group had the esteemed honor to perform at the Broward County ArtsEd Forever at the prestigious Broward Center for the Performing Arts. In September for Ganges meets the Nile and Orlando Curry Duck Curry he performed for the first time, his English and Hindi Chutney song on tracks and shared the stage with top well-known artists in the Chutney industry from Trinidad.  His 3rd he wrote 10 songs album entitled Devi Shakti Bhajans. In 2017 he was again on a Phagwah Tour in USA. In Trinidad, he performed in 2 maticoors, a wedding and 2nd Sunday.  He also worked with top recording producers such as, Professor Bounty Target and Big Rich Pungalunks Factory.  He released his first English only Chutney song  "Maco man" on 103FM, 919FM, and Bacchanal Radio. And recorded a religious song  combining North and South Indian Langauages, mantras, melodies, and drummers in his "Dee Baba" song.  In Florida he did the opening prayer and sang four Devi songs for the musical dance drama Nav Durga Warrior Princesses.  In Kingston Jamaica, at the 3 day Divali Celebration at the Sanatan Dharma Mandir, Pt Kalpoe was the Suriname Cultural Ambassador, Singer, and Officiating Pandit.  He performed a very unique and once in a lifetime experience for the natives with a 1008 names of Maha Lakshmi Hawan. His 4th CD 10 songs his original compositions named "Kali Lakshmi Amma Bhajans.

In 2018, Pt Kalpoe will be the Officiating Pandit  for the first Parthiv Shiv Lingam in the Park in the USA.  He will be the only Suriname Pandit representing his country. He will also be the officiating Pandit for the Maha Shivatri at the Shri Saraswati Devi Mandir in Oakland Park FL.  He has annual pujas in Florida, New York, New Jersey, & Trinidad.  Pt Kalpoe Bhajans are very popular and receives much airplay internationally on Indian Talent Sangeet in Florida, Brownehill Radio in Nigeria, and Radio Jagriti in Trinidad.  This is in additional to radio and TV airplays in Suriname. His "Jai Bhola Bhandarie" Shivratri songs  "Hanuman Jayanti" and "Veer Hanuman" songs were all released on Indian Talent Sangeet FL, Guyana Chunes NY, and  Radio and TV Jagrati in Trinidad. In June he is invited to Trinidad for a 3day wedding and birthday satsang. In July we will be the headline artist for the dance drama Tandava Cosmic dancer a Jayadevi production along with personal pujas and kundali/joytish/patra readings in Florida New York and New Jersey. 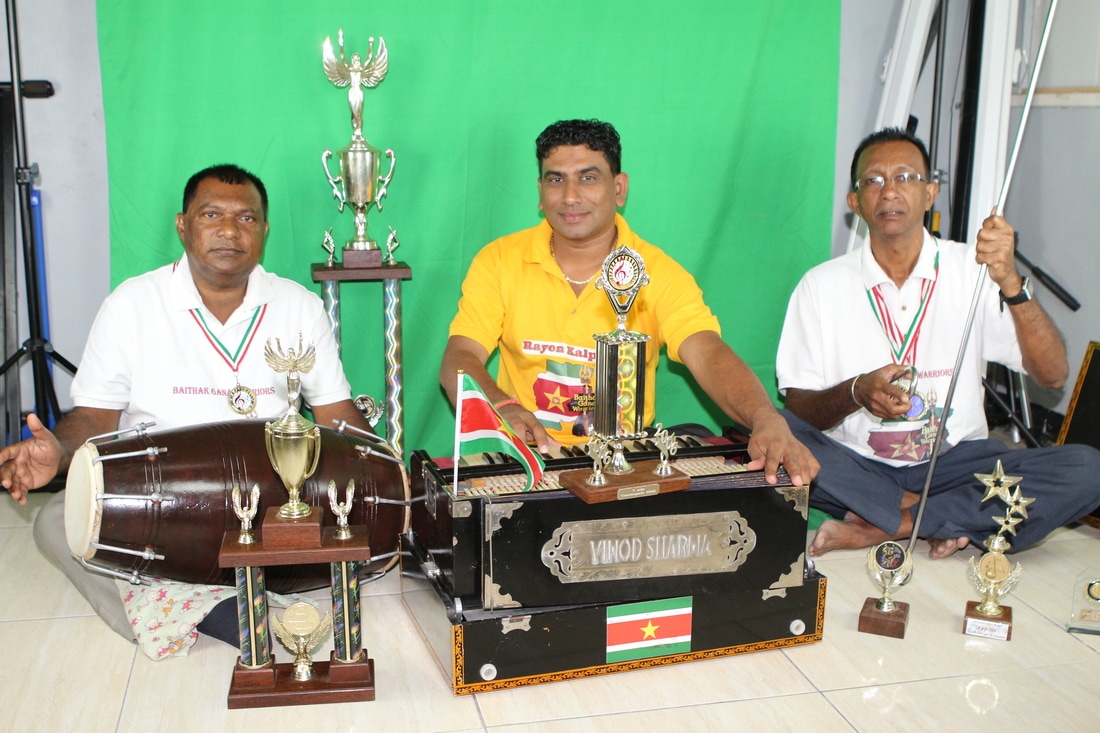